As this writer sits at his kitchen table surrounded by NFL Draft review magazines, Quarterback stats, Mock drafts and a cup of tea something dawned on me. Why the hell is Josh Allen projected to be drafted Number 1? I then thought, why is he even being projected to be drafted in the first round? It made me think about the whole phenomena of the strong arm, prototypical quarterback. In a roundabout way this has led me to do my own quarterback evaluation.

Now I may be naive in some of my assumptions and theories here, and please let me know your thoughts, but I feel that over the years I have been successful in my unscientific, “Why the Hell are they drafting him?” Method of Quarterback analysis. My previous successes have included the much-heralded ‘Jamarcus Russell didn’t smile when he was onstage at the draft’ method of personality test. Also, the’ Carson Wentz was a winner in college so why not in the pros?’ Method. This article is going to look at each of the most talked about Quarterbacks in the draft and I will give my 82.7% serious take on how I think they will do, and where they might be drafted.

Let me begin with Josh Allen the inspiration for my story. If the Cleveland Browns select Allen Number 1 overall it will be the most Cleveland Brownian (not a real word by the way) thing in the world! The analysis of Allen and why he, in this writer’s opinion, is being over hyped is due to the idea that if a player is tall and has a big arm he will be a great NFL Quarterback. How many times do we have to go through this? Ask any Raiders fans about the tall, strong armed Quarterback we drafted by the name of Jamarcus Russell, I still have nightmares about that man. Blake Bortles, Brock Osweiler, and Paxton Lynch have also come to be seen from this viewpoint of the model for perfect quarterbacks. None of these players are going to the Hall of Fame anytime soon (coincidently 2 are John Elway draft picks, just saying).

It’s a little unfair I hear my wife say to dismiss Josh Allen because of my Post Jamarcus Stress Disorder. This is true but let me delve into this one then. Josh (I feel that we are on first name terms now) had a completion percentage of only 56.3% in his final year in college and 6.7 Yards per attempt. Both stats were low compared to other top quarterbacks going into the draft. My main concern is there is nothing special about Josh Allen. He was not a winner at college, he didn’t blow away the opposition he faced unlike Carson Wentz who also played at a lower level. When he faced better college teams he did not elevate his game. I just feel that if he is not that good in college how is he going to get better in the pros. He needs a team with patience and a quality coach to even give him a chance to develop. I’m sorry but that’s not going to happen if he is a top 10 pick. 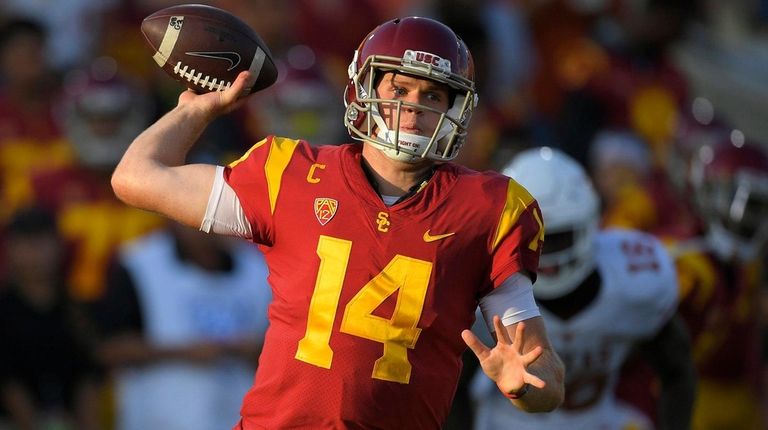 Sam Darnold appears to be the safest pick at Quarterback in my opinion. This is based on a process of elimination. He is not too short, he has good not great stats and he looks like he could develop into a quality starting quarterback in the NFL. There is nothing controversial about Sam Darnold, call him boring if you like.

Darnold was seen as an Andrew Luck style number 1 overall pick before last season. Indeed the phrase Suck for Sam had been heard. But last season was not great for him. 63.1% completion rating, 8.6 yards per attempt but 26 TDs and 13 INTs. He also developed a fumbling problem, 11 last season 14 games. Compare that to the 2016 season where he threw 31 Touchdowns and only 9 interceptions. We only have 2 seasons of Darnold to look at so we can not be sure which one was the anomaly. If I were a General Manager I would be very tempted to give the keys to my franchise to Darnold.

Let’s start at the most important question, can he play quarterback? 62.6% completion and 8.3 yards per attempt are very similar to Darnold. Josh Rosen can play football at the higher level. I can see however Rosen aggravating coaches and hometown fans. He also has already had a history of injuries including concussions that sometimes might question and drop Rosen down their draft board.

My personal favourite quarterback of this year’s draft class. I did not say best or most likely to be league MVP and multiple Super Bowl winner. He is a competitor , pure and simple. He is over aggressive as has been well documented which is a knock on him. However, against high quality opposition is played well unlike over quarterbacks in this class. His final year stat line is incredible 70.5% completion rate, 11.5 yards per attempt ,43 touchdowns and 9 interceptions. As a comparison Andrew Luck in his final year at Stanford had a 71.3% completion percentage, 8.7 yards per attempt, 37 touchdowns and 10 interceptions. So why isn’t he be going to be the top pick in the draft? All because he is only 6 foot tall. As I said when discussing Josh Allen being 6 feet 5 does not mean you are going to be a success in the NFL. I’m not going to labour the point, but Russell Wilson and Drew Brees are obvious examples of quarterbacks who do not fit the scouts mould of a perfect quarterback.

My final quarterback to look at is Lamar Jackson from Louisville. In a similar manner to Rosen and Darnold his last year was not as good as his previous year. 59.1% completion rate, 8.5% yards per attempt, 27 touchdowns and 10 interceptions. The big knock on Jackson is his size, rather than his height (6 foot 3) but his bulk (15 stone). The analysts say that he is not sturdy enough to play quarterback in the NFL and should switch to quarterback. Are they saying that about any other quarterbacks? Jackson refused to perform Wide Receiver drills at the combine saying he was a quarterback. I say fair play to you Lamar. For what its worth I think he will be a good quarterback in the NFL.

So there you go that’s my take on the most discussed quarterbacks in this years class. For what its worth I think Darnold, Mayfield and Jackson will have the best NFL career. Rosen is most likely to get injured and Allen will be a bust. My thoughts are based on nothing more than half-arsed internet research (all stats are from sports-reference.com) and sheer guess work. Draft analysists are like weather men, wrong most of the time but still employed.

I love the draft, sometimes I think I enjoy it more than the actual games.

Tim has been a Raiders fan for over 20 years.He can trace his obsession back to his Auntie from Canada who sent him a Marc Wilson LA Raiders jersey for Christmas in 1985.  He is still bitter about the Tuck Rule Game and spends far too much time worrying about where the Raiders will be playing in 2015. Tim is always happy to discuss football on twitter @raidertim34 (even if you don’t agree with him)